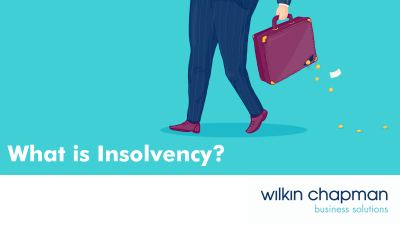 Insolvency is when an individual or company is not able to pay its debts or expenses as they fall due for payment. Company insolvency or Corporate insolvency means that a company’s liabilities (debts) are greater than its assets or the company cannot pay its bills whether that is tax or VAT due to HMRC or payments to supplier or salaries to employees.

The two tests of insolvency are called:

The balance sheet insolvency test measures the assets of your company such as property, machinery, stock, ledger book, and weighs these against your company’s liabilities (debts) now and in the future. If the liabilities are more than the value of the assets, then the company is technically classed as insolvent.

Sometimes, it is possible that the balance sheet test shows the company as insolvent but day to day the company can pay its debts on time. Many companies would fail a balance sheet test so often the test of insolvency is the Cashflow test described above, particularly if the company has a County Court Judgment (“CCJ”), Statutory Demand or Winding Up Petition issued against it.

Insolvency is a dangerous position for any company or its Directors to face but it is not always the end of the road and rescue options are available such as Administration or a Company Voluntary Arrangement. They could help to stabilise the company and/or restructure finances to allow the company recover and continue trading.

If you are concerned your company is insolvent or is suffering financial difficulties, then it’s always advisable to seek specialist advice from an insolvency practitioner as soon as possible. The earlier the problem is addressed the more chance of rescuing the company from its current position. Most insolvency practitioners will be pleased to have an initial discussion and give an opinion on the best option without charge.

If you think your company is insolvent then there is a warning if you are a Director. A Director has duties and responsibilities including ensuring that they protect the interests of creditors as well as shareholders and fellow Directors. This means that you should be careful not to make decisions which could result in the company’s financial position becoming worse or increases the company’s losses. If it’s determined that the company is insolvent normally a Director should make the decision to cease trading immediately. However, on some occasions continuing to trade may be justified if there is likely to be a benefit to the creditors e.g. finishing a project to ensure payment from a customer. You should seek advice from an insolvency practitioner to assist with making that judgment.

If you fail to meet your duties as a Director and the company’s financial position worsens then there is a risk that you could be accused of wrongful trading which could lead to director disqualification and/or the possibility of being ordered to contribute personally to the company’s debts.

In summary, if you think your company is insolvent the sooner you seek advice from an insolvency practitioner the more options are likely to be available to rescue the business.