After the military: living with hearing loss 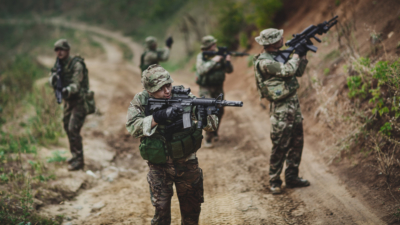 On national Deaf Awareness Week, our military team consider the causes and effects of debilitating hearing conditions such as noise-induced hearing loss.

Noise exposure is one of the major causes of hearing conditions such as tinnitus, partial and permanent hearing damage. Whilst avoidance and protection are strongly encouraged by charities such as the British Tinnitus Association and Action on Hearing Loss, exposure to excessive noise is sometimes inevitable.

Sounds above 85 decibels are considered unsafe and can damage the ears, meanwhile sound intensity doubles with each 3 decibel increase therefore becoming more dangerous. Examples of excessive noise levels in everyday life include:

Long exposure to unsafe noise levels as well as short exposure to dangerous noise levels, are an unfortunate likelihood during military service. From vehicles and weapons to explosions and pyrotechnics, service men and women are subject to dangerous decibels which can have long-lasting damage.

Because the damage from noise exposure is usually gradual, it might not be evident immediately. Subtle changes may transpire over time, such as frustration and difficulty differentiating between background and foreground noise, an increasing reliance on louder volumes and lip-reading during conversations.

Sounds may become distorted or muffled and phantom noises such as ringing, buzzing, hissing, roaring and pulsing can arise. As well as this, symptoms may coincide with feelings of dizziness and a lack of concentration.

Both noise induced hearing loss and tinnitus can occur in one or both ears, and can continue constantly or sporadically. But because hearing damage is one of the less visible effects of warfare, it often receives little attention and may be ignored.

According to The Royal British Legion’s Lost Voices Report, hearing conditions are three and a half times more commonly occurring in veterans than the general population. Sufferers of hearing conditions often report feeling isolated as a result which, coupled with transitioning from the forces whether due to a natural end to service or medical discharge, can have damaging effects to psychological wellbeing.

Hearing charities such as the British Tinnitus Association and Action on Hearing Loss offer a supportive space for people who are connected by hearing loss, and provide helpful resources, latest research and real life stories to help better manage tinnitus and hearing loss, allowing a future which isn’t dictated or defined by a hearing condition.

If you have been affected by a military injury, get in touch with our dedicated team of military specialists to see how we can help. Email MilitaryEnquiries@wilkinchapman.co.uk outside of office hours, or call our freephone number 0800 046 2567 on weekdays between 9am and 5pm.