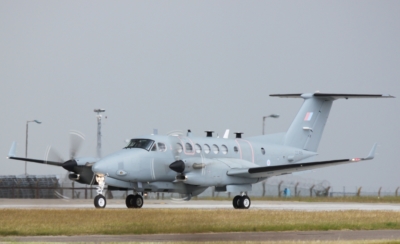 A £250 million deal to support RAF Waddington was signed by the Ministry of Defence last week, supporting the base’s ISTAR aircraft fleet and securing 450 jobs.

RAF Waddington, a main operating base for airborne intelligence systems in Lincolnshire, is one of the busiest stations as the hub of the Royal Air Force’s Intelligence Surveillance Target Acquisition and Reconnaissance (ISTAR).

Notably, RAF Waddington is home to a fleet of aircraft including Shadow R1, flown by 14 Squadron RAF. Shadow uses electronic capabilities and satellite communications to perform a vital intelligence-gathering role for the UK Armed Forces, previously used on operations in Iraq and Afghanistan.

The recently signed deal between the MoD and Raytheon will provide the management, maintenance and modification of Shadow to “ensure the UK retains its position as a global leader in battlefield intelligence gathering for UK troops and NATO alies” according to Defence Minister, Stuart Andrew.

Approximately 3,500 military personnel, civil servants and contractors work at RAF Waddington currently, however the support contract will sustain many jobs at the base and across the UK, as well as 200 jobs at Raytheon’s facilities in Broughton, North Wales.

In a 2015 Strategic Defence and Security Review, plans indicated to bringing in a total of eight Shadow aircraft tying in with the new contract’s assurance of aircraft availability and established services at RAF Waddington.

RAF Waddington is one of many military bases in Lincolnshire, including RAF Scampton whose future is still unknown.