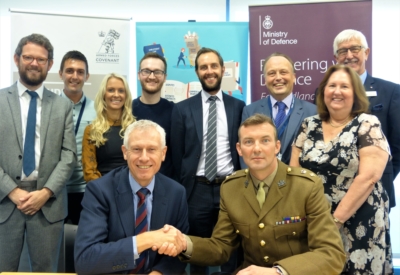 As well as extensive experience, our military experts have a unique understanding of the issues faced by service personnel.

With strong negotiation skills, the team fight to obtain maximum damages for all clients as well as ensuring they receive the best rehabilitation required to rebuild their lives. Find out about our team below.

“Across our region there is a proud military history which extends to the present day. It is important that today’s generation, and those in the future, understand the sacrifices that have been made, and will be made, by those who serve in our Armed Forces.”

James Marsden is the head of the Wilkin Chapman military sector, and was appointed partner for the family department in July 2018. Having qualified as a solicitor in 2011 following a training contract with the firm, James has experience in dealing with high value financial matters, complex cohabitation matters and private children proceedings.

Louisa Donaghy qualified as a solicitor in 2006 and has successfully represented hundreds of service personnel, achieving settlements in excess of six figures in many cases.

Having developed a niche practice in bullying, harassment and sexual assault cases for members of the Armed Forces, Louisa can also advise on the Armed Forces Compensation Scheme (AFCS) and appeals. In addition, she manages high value civilian personal injury claims, and is specialist in complex and serious injuries including head, brain, spinal cord injuries and orthopaedic injuries.

Tean Butcher has significant responsibility for the military sector at Wilkin Chapman LLP. Qualifying as a solicitor 25 years ago, Tean has successfully represented hundreds of military personnel, achieving substantial settlements in many cases.

In addition, he is a former President and currently a committee member of Forces Law, a national group of solicitors acting for Service personnel.

Tean has a solid background in bringing claims against the Ministry of Defence including claims for injuries sustained on exercise, in theatre and by Special Forces. He also has a special interest in cases involving PTSD, as well as advising on the AFCS and appeals.

Gordon Holt is a specialist criminal law advocate with over 20 years' experience, as well as a qualified Higher Courts Advocate.

An integral part of the team, Gordon has all-encompassing experience of military law. He regularly represents clients before the Courts Martial, both in the UK and abroad.

Gordon’s advice and assistance has been sought across the full range of criminal matters, whether it be road traffic matters, regulatory offences for businesses and the self-employed, or allegations of serious violence and fraud.

As of 2015, he has been a Wilkin Chapman partner and undertakes a diverse range of litigation and dispute resolution for both claimants and defendants with particular expertise in wills, inheritance and commercial dispute as well as data protection, privacy and defamation.

Jonathan has forged a niche practice in complex personal injury claims, particularly on behalf of members and former members of the Armed Forces, including actions relating to Hand-Arm Vibration Syndrome and NFCI. He also advises on claims for non-payment of pensions and professional negligence arising from advice in this regard.

Tom can assist with various military employment matters including the submission and running of service complaints, advising respondents on service complaints raised against them, advice in respect of AGAI 67 matters and military tribunal work such as racial discrimination and sexual harassment claims.

Jonathan Baker is a senior solicitor in the medical negligence team, acting on behalf of patients or their relatives who have been injured through negligent medical treatment. Jonathan deals with all areas of medical negligence, but his specialisms include fatal cases, eye claims, brain injuries, spinal injuries, and surgical negligence.

Showing a high level of knowledge, skill, experience and practise, Jonathan is a member of the Law Society’s Clinical Negligence Accreditation Scheme and has ran a mentoring scheme with the University of Lincoln since 2012.

Liam May worked as an employment law solicitor until 2015, before specialising in and working exclusively with medical negligence.

Lucy Reding completed her legal studies in 2015 and qualified as a solicitor two years later following a training contract with the firm.

Starting in the personal injury sector but now working in the family law department, Lucy works with James Marsden on a range of family matters including divorce, financial matters on the breakdown of a marriage, cohabitation, domestic abuse and childcare issues.

Joshua Briggs joined Wilkin Chapman 14 years ago and qualified as a solicitor in October 2014. Now a partner, he is committed to helping clients by clearly identifying their goals from the outset and providing suitable advice.

Joshua deals with all areas of commercial litigation with specialist expertise in landlord and tenancy claims as well as property and commercial disputes.

The legal issues that arise in the Armed Forces are often very unique from those that arise for civilians. For guidance through any legal military matters, get in touch with our dedicated team by emailing MilitaryEnquiries@wilkinchapman.co.uk outside of office hours, or calling our freephone number 0800 046 2567 on weekdays between 9am and 5pm.